The rigorous discipline of firefighting surmounted into a passion for Captain Jessica Cervantez, who says it carries her through the difficult times. Now surpassing two decades of service, her inclination to provide community care fuels an ambition to maintain National Registry certification. In a career where no two days are the same, Captain Cervantez credits the mental toughness earned from knowing that the purpose comes from a place within—to respond with hope when it is needed most. 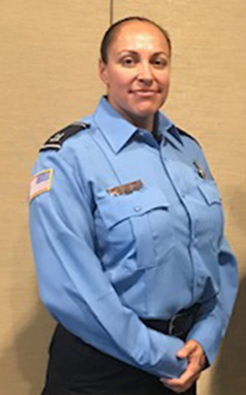 Firefighting is learning how to face the odds, while knowing the tragic circumstances often define the stability of a path forward. For Captain Cervantez, it became more than the glorified hero persona, and instead, a privilege to serve in different capacities. Stationed at the Tyndall Air Force Base, Fire and Emergency Services, Cervantez’s work expands beyond the scope of practice and into the personal avenues discovered from holding a national certification. A member of her local church’s emergency response team, Cervantez exercises her involvement across the field; most recently becoming an emergency response diver. “It's opened up a lot of doors to me being allowed to volunteer in my community, and it's something that I'm passionate about,” says Cervantez.

The versatile nature of these experiences is not the absence of hardship, but the evidence of progress by taking chances. Cervantez recalls feelings of fear and uncertainty that often accompanied the early years of her career, knowing the adjustment would be as challenging as it was rewarding. Her initial commitment to the Marine Corps guaranteed certifications at the county, state, and national levels, further encouraging her to fulfill the duties of an Emergency Medical Technician (EMT). Leaning her skills into the firefighting profession, Cervantez quickly noticed the frequency of calls tied to EMS protocol. One year and a certification later, Cervantez blended the responsibilities to provide the prehospital care that would soon become the turning point in one young woman’s life.

These are the experiences that define the meaning behind the actions, the ones that Cervantez attributes to the dedication that drives her forward. “Those rare times when it ends a little better, I cling onto those,” says Cervantez, deeming teamwork the backbone of EMS. “Those are good moments…hang on to the good moments.”

Upholding the value of EMS manifested into a teaching opportunity for Cervantez, who, in addition to being a lead firefighter, is an instructor for providers undergoing certification. Preferential to continuing education, Cervantez seeks to broaden the horizon for EMTs, recognizing the significance it made in her own career path. “You always want to meet the highest standard you can when you're providing emergency medical care,” said Cervantez. A building block for the mission to serve, she credits National Registry certification for the ability to witness the reward of being in EMS— “to be the rock in a moment when people are falling apart; when they are facing the unknown—especially a loved one, or a child.” she said.

That mindset embodied the hours-long call Cervantez responded to, noting it as her most memorable, when she arrived on scene to the unexpected. A room tainted with blood, Cervantez and her partner entered the house, immediately connecting the cause to the cruelty that had unfolded between a husband and wife. The knife held by the woman was a weapon to her body, as excessive cuts wrapped around the visible skin. Screaming in aversion to the husband’s demand, Cervantez lunged at her after a final slice through the wife’s arm nearly severs it. The immediate grab of her arm by Cervantez to stop the bleeding would soon turn into hours of intensive medical care, as the cut ran too deep to be released. Hearing the husband’s insistent tone that led to his wife’s self-inflicted injury altered into a life-giving connection for Cervantez, who soon discovered they shared the same first name—Jessica.

A stabilizing emergency room visit initiated the conversation that Cervantez still recalls to this day. “We began talking and the reality of it set in. You could just see her demeanor change, and I just remember she started calming down,” said Cervantez. The degree of damage to the woman’s arm required an out-of-town specialist, doubling the wait time for arrival and the woman’s admittance into surgery. Cervantez’s grip held tight up until surgery preparation, though parting ways was short-lived, as a next-day visit unveiled the woman, healing from a night of intensive care. “They ended up saving her hand, luckily, and saving her life,” said Cervantez, relieved at the responsiveness of the woman, tears falling down her face at the sight of the EMT who saved her life.

Captain Cervantez certainly held onto this moment, a silver lining in the boundless calls that flood each day with new chances, chances to change the odds. “You should want to provide and treat somebody with love and care,” says Cervantez. “Maybe it was me that grabbed her for a reason.”

In her 23 years of service, personal connections are a key point of closure for the victims Cervantez responds to. The long journey ahead, Cervantez notes, is sometimes just the beginning.